Excision of Cranial and Spinal Arterio-Venous Malformation (AVMs)
These are complex surgeries aimed at removing malformed conglomeration of blood vessels that parasitize the brain’s blood supply. The operation involves meticulous dissection around the tumour like growth of abnormal blood vessels and removal in toto. Similar AVMs in the spinal cord require greater expertise. However the procedure involved in similar to the one described above.

Clipping of aneurysms
Intracranial aneurysms are out -pouchings of blood vessels, similar to a balloon. These may burst causing life threatening sub-arachnoid haemmorage. We are equipped with the facilities to perform ‘clipping’ of these aneurysms in any location in the brain after performing a digital subtraction angiogram (DSA). Clipping means, that the aneurysm is removed from the circulation by application of a clip at its base.

Surgery for giant aneurysms under CPB
For certain aneurysms which are located in exquisite areas or are giant in size, clipping as described above may not be feasible. In such cases, the help of the Cardiac surgery team is sought to perform a Cardio Pulmonary Bypass and temporarily block the blood flow to the site of the aneurysm. This is done by cooling the patient to profound hypothermia conditions and initiating Total Circulatory Arrest. The window of opportunity is around 30 minutes within which the clipping has to be accomplished. This expertise is available in a only a handful of centers around the world.

Dural AV fistula (DAVF)
DAVFs are rare anomalies which may be managed with either open surgery or interventional procedures. At SSSIHMS a variety of operative strategies are employed in an attempt to disconnect the abnormal communication between an artery and a vein.

Excision of Cavernomas
Carvernomas are mulberry shaped overgrowth of intracranial small blood vessels, which may bleed. They may be located in almost any part of the brain or spinal cord. Great care has to be exercised in removal of these lesions which may be small and may be located in eloquent regions of the brain or at great depth. Sophisticated surgical aids like a neuro-navigation system are often employed to reach the lesion and remove it without damaging the surrounding brain tissue.

Trigeminal Neuralgia
This is a painful condition involving the face where the patient presents with unbearable, episodic, shooting pain in a particular portion of his/her face. The offending structure is usually a loop of an intracranial blood vessel which irritates the nerve conducting sensation from that portion of the face. Surgery is very gratifying and involves separating these two structures under the operating microscope.

Intracranial gliomas
These are brain tumours which may range from benign to malignant high grade tumors(Grade I to grade IV). Depending on its location, size and patient condition, the surgical strategy is planned for tackling each tumor.

Acoustic tumors( Vestibular schwannoma)
These are common tumors arising from the nerve responsible for conducting the sound from the ear. Unfortunately even in this day and age, the patients seen at SSSIHMS present at a late stage with some even losing vision and almost all tumors being extremely large in size.

Meningiomas
Meningiomas are benign tumors arising from the covering of the brain and spinal cord. Depending on its location, the surgical approach is planned.

Complex cranial base tumors
Cranial base surgery is a sub specialty in neurosurgery which is oriented towards the approach of lesions located at areas in the brain where routine surgical approach may not be successful.

Pituitary tumors
The pituitary gland which has been described as the master gland in the human body may be home to a variety of tumors some of which may present with mass effect (visual deterioration, neurological symptoms) and others with endocrinological symptoms. Trans-nasal, trans-sphenoidal approach is used commonly to operate these tumors. i.e the surgeon operates on the pituitary gland through the nose. Other larger tumors may require an intracranial approach.

Skull tumors
A variety of primary and secondary skull tumors are seen. Surgery involves removal of the tumor and reconstructing the bone defect.

Intracranial metastasis
The brain is a common site for the lodging of cancer deposits from primary malignancies elsewhere in the body. Sometimes the location of the primary may elude detection.

Intraventricular tumors
The ventricles of the brain are cavities filled with the cerebrospinal fluid. A whole range of tumors from, the most innocuous to the most malignant may be harbored within the ventricles. By virtue of its location, the approach has to be planned in great detail before embarking on surgery.

Lumbar disc disease is one of the most common conditions encountered in the clinic. If non operative measures fail, surgery is offered. Surgery is done with the help of an operating microscope or with the endoscope. The surgery involves removal of the disc material and decompressing the compressed nerve roots.

Lumbar spondylolisthesis means, a slip of one vertebra over another. Correction involves, realignment with the help of titanium alloy screws and rods and bony fusion.

Similar to the lumbar disc disease the cervical or uppermost portion of the vertebral column may also degenerate. One or two levels of disc protrusion and cord compression are treated by removing the offending disc and fusing that level by interposing a bone chip in the space. For two or more level involvement, the disc spaces concerned and the intervening vertebral body is removed and a large bone graft placed and this is reinforced by placing a plate and screws (Corpectomy). A larger level of involvement requires either removal of the back portion of the vertebrae (laminectomy) which may be aided by placing screws through the lateral masses. Sometimes laminectomy may be inappropriate and here the back portion of the vertebrae may be opened out (laminoplasty)

Similar to cervical and lumbar degenerative disc disease, the thoracic vertebrae may also degenerate though less frequently. However, the approach for these locations is more complex because of the lungs and heart located in front of them.

Spinal tumors require gentler handling and precision. They may range from benign IDEM which originate from either the nerve roots or from the coverings to tumors arising from the neural tissue itself.

Tuberculosis infection of the spine may require surgery because of the compression of the neural structures by the pus or destroyed bony elements. Surgery is followed by antituberculosis chaemotherapy for a course of one and a half years.

Stereotaxy is a technique which uses the Cartesian coordinates to precisely localize any portion within the cranial cavity. This is helpful in performing surgeries for conditions located deep within the brain.

Intracranial abscesses are decreasing in occurrence because of better medical facilities. However at SSSIHMS because of a large cardiac department, brain abscesses secondary to congenital heart disease is seen very often. Emergency surgery is done to remove the pus. Apart from heart conditions, infections anywhere in the body like ear, tooth etc, may spread to the brain.

Peripheral nerve surgery involves operating on the nerves which come out of the spinal cord. One of the commonest procedures it involves, decompressing the median nerve at the wrist by opening out, the carpal tunnel through which it passes. 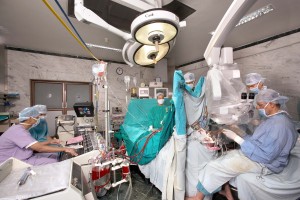 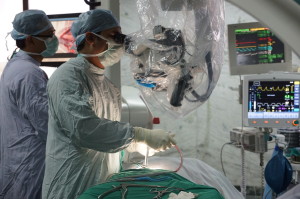 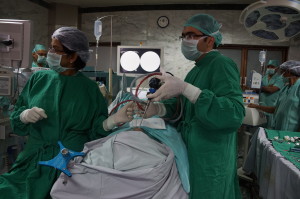 Endoscopic Skull Base Surgery in progress